Runes are the basis of the magic system in The Consuming Shadow. There are five runes used in-game which can be used to cast magic, and to aid in identifying the invading Ancient.

The five runes can be viewed at any time, either by selecting the 'spell book' icon (located either in the item selection screen in the car next to the Notes and Medkit icons, or at the bottom of the HUD while in Dungeons) or by pressing TAB (Dungeon areas only).

Spells are cast by accessing the Spells menu, and selecting the appropriate runes in order from the list.

Runes will be found painted onto just about any flat surface available in Dungeon areas - strangely, this seems to include even trees and bushes.

Runes will be painted in one of five colours; white, yellow, orange, red, or purple. The colours also have significance, as various colours are associated with particular Ancients. It is probable that the runes are painted on by a Cultist of the Ancient who has marked that territory for its own.

Runes in Dungeons are displayed in one of three ways: 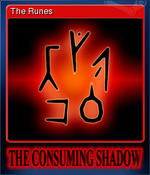 Retrieved from "https://the-consuming-shadow.fandom.com/wiki/Runes?oldid=5180"
Community content is available under CC-BY-SA unless otherwise noted.