The Scholar is the main protagonist and a playable character in The Consuming Shadow.

The Scholar is the default playable character. He has 60 hours to stop the invading god, a full supply of 9mm bullets and £15 to spend. He has no particular strengths or weaknesses.

The Ministry Man's diary says he's a university researcher, on a list of the Ministry's potential employees. He is a married man with children staying with either his mother's or mother-in-law's household while he is away. Game creator Yahtzee describes him as "A silhouette. You can believe what you like about him." after calling him "a pretty judgemental scholar" in his review of the game.

All characters have introductions when selected in the character selection screen. This made up of two paragraphs, each picked from a pool of pre-written passages. These are the possible passages for the Scholar.

A shadow is trying to enter our world. One of the Ancients, The runes confirm it. I don't know which one. All I know is that they arrive at Stonehenge, three days from now.

Something made me check for patterns in the runes. I don't know why, but I'm glad I did. A massive synchronisation is coming, centred on Stonehenge, in roughly sixty hours.

Last night I dreamt that I was killed by something horrible. Two details stand out: 'Stonehenge' and 'three days'. And I've learned not to dismiss my dreams when they get this vivid. - Unlocked with any ending.

Terrifying visions of the Ancients swim through my mind, combined with visions of Stonehenge. I estimate three days before the barrier breaks down and one of them invades. - Unlocked with any ending.

One hope remains: the Ritual of Banishment. Four runes, incanted at Stonehenge, will close the gateway. The trouble is, I don't know what the ritual is. If I investigate the strange events heralding the shadow, maybe I could piece it together. That's all I have: a 'maybe'.

I have the ability to incant runes in the Ancient tongue, but I do not know what incantation sequence will banish the evil, nor do I know which evil to banish. What I do know is that I will never determine these things by sitting here letting the time tick away.

I know what I must do: explore places touched by the Ancients, assembling clues to piece together the banishment ritual and the identity of the invading god. But I'm not sure how I know this. I have the strangest feeling that it might be because I've already done this. - Unlocked with any ending.

For some reason I cannot shake a sensation of deja vu. I have memories of assembling a ritual, fleeing through darkened hallways, and firing a gun at something unimaginable. I feel like some distant part of me may have died this way. Hundreds of times. Perhaps thousands. - Unlocked with any ending.

I didn't want to believe it until I saw it with my own eyes, but it's true. The tunnel entrance at Stonehenge has reappeared. But there's something different about it, now. It seems bigger, more cavernous. An eerie breeze whistles through its halls.

None of the texts in my possession are offering any insight into this. Most of them have become useless since I averted the apocalypse they prophesised. The only way to learn the meaning of this is to descend.

Was I right to leave my family?

Could my wife and I ever have what we used to have again?

Are my family safe?

Do my children still think of me?

Would my father be proud of me?

Am I making a difference? 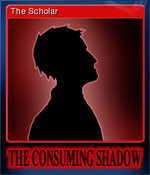 A determined and idealistic reader of the occult, who foresaw the coming of the Ancient and now sacrifices everything to ensure that a world remains for his children.

Retrieved from "https://the-consuming-shadow.fandom.com/wiki/The_Scholar?oldid=5148"
Community content is available under CC-BY-SA unless otherwise noted.