A two-fisted man of action in a world beyond his understanding - Character description.

The Warrior is a playable character in The Consuming Shadow.

The Warrior has no ranged weapon, but instead has an advanced melee ability with longer range, and increased damage (Note that moving while attacking is not possible). He also possesses a dodge ability, a short backstep during which he takes no damage while it is occurring, similar to the Soldier Buzzer's recoiling when it takes damage. He is also wanted by the police.

The Warrior does not have a unique constellation, but instead the Bull (increases melee damage dealt) and the Smith (increases chance of finding random items) will always appear.

The Warrior is unlocked when a Locksmith's Kit is delivered to him while playing as the Scholar, and the following dungeon is completed successfully, which doubles the player's melee damage for the remainder of the run. The player then needs to finish (not necessarily win) that playthrough for the Warrior to then be unlocked. The player earns the job to deliver the Warrior said kit randomly from Trilby via a text message should the Warrior not already be unlocked.

Little is known about the Warrior. His father regularly called him a failure, and it is implied that they are not on good terms. The Warrior speaks fondly of his mother, but nothing about her is elaborated.

He is known to have a strong relation with his boss. Text messages from his boss tend to grant sanity or money. It can be inferred, however, through these messages that the Warrior is a soldato in the mafia, given his boss' statement about the Warrior being in the clear for the crime that sent him into hiding, and how he "takes care of his soldiers", as well as the fact that the money he receives from the boss is occasionally cited as "for his silence".

The Warrior is haunted by his past crimes, as seen by the content of various text messages that serve as reminders and result in Sanity loss.

All characters have introductions when selected in the character selection screen. This made up of two paragraphs, each picked from a pool of pre-written passages. These are the possible passages for the Warrior.

After three days stuck inside practising karate, I don't think the police are looking for me anymore. They'll be more concerned about these creatures I keep seeing in the streets.

Boss told me to hold up somewhere until the heat went down. He said he'd give me a signal when it was all clear. Something's going on outside, but I don't think it's a signal meant for me.

The job went bad. Someone must have been trying to sell Boss out. But I'm breaking cover because I've looked outside and I don't think many people are worrying about missing jewels right now.

I wouldn't have stayed in this village if I wasn't hiding out, but when those things appeared, I had to do something. And now I guess I'm involved in this whether I like it or not. - Unlocked with ending A.

I stole a car from some college professor type, and the moment I caught glimpse of the papers in his back seat, I couldn't stop reading. It was the first thing that made sense ever since this whole thing began. Could there really be only three days left?

The notes I've found are talking about some kind of end of the world. Got to admit, it's starting to look the part. I don't understand what it is that's trying to end the world, but I do understand that I don't want the world to end. I'm a fixer. Maybe I can fix this, too.

By some cruel fate I seem to have accidentally stolen the car of the one person who could have stopped the end of the world, and now I have to take up where he left off. Maybe that's a good thing. Maybe better a man who can take care of himself than some skinny boffin.

Mum always said I had a sixth sense for these things, and the hairs on the back of my neck are prickling like you wouldn't believe. Something tells me that something big is coming, and something else tells me that I can stop it. I don't think I can just dismiss that. - Unlocked with ending C.

Something made me go back to Stonehenge, where all that craziness ended. I don't know why. Maybe I've spent too much time by myself lately. I wasn't going to do anything. Just take a walk around, and listen to the wind.

The last thing I expected was to see that entranceway again, wide open and inviting. Something tells me not to go in. But something else tells me that if I don't, I'll be wondering about this for the rest of my life...

Would prison have been so bad?

Do these tunnels ever end?

Am I going to survive this?

Am I a bad person?

Do I deserve forgiveness? 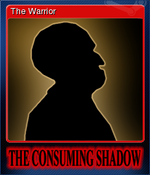 Stuck in hiding with nothing but his guilt for company, he sees the coming of the shadow as an opportunity to exorcise older, deeper-seated demons.

Retrieved from "https://the-consuming-shadow.fandom.com/wiki/The_Warrior?oldid=5131"
Community content is available under CC-BY-SA unless otherwise noted.