Start a Wiki
A master of magic blighted by chronic forgetfulness - Character description.

The Wizard is a playable character in The Consuming Shadow.

The main con to The Wizard is that she has no melee attack. However, she starts with knowledge of all spells, and she doesn't suffer sanity loss from casting them. This makes the Pentagram Necklace useless.

However, unlike all the other characters, using spells degrades the runes necessary to cast it.

Runes do not degrade when:

However if a rune is degraded then it can't be used in these scenarios.

Each rune can be used five times before being unusable. Runes can be renewed by analysing them drawn on walls, which will restore that rune. Finding these runes is random and can only be done in dungeons. This makes The Wizard a difficult character to play; if the player has run out of bullets and the runes needed for the Mass Death and Circle of Death spells are depleted, enemies cannot be killed. Some runes can appear very infrequently throughout a whole playthrough, i.e. once or twice, while other will appear 20-30 times.

While playing the Wizard, runes not associated with any god will appear on the walls sideways. These only appear when playing this character, and they allow her to replenish runes that are not associated with one of the three gods (though they can still be invoked for potential sanity gain, as usual).

Analysing the runes drawn in the Banishment Ritual chamber will replenish all runes, allowing the player to cast the banishment spell.

In a "find three survivors" dungeon there is a chance for one of the survivors to be "a woman in office attire". When the dungeon is completed she will meet you outside and give you the name of a town to go to with a pentagram necklace. Go to that town and complete the dungeon that you find, and you will get all the spells for that run and unlock the Wizard, whether you win or lose the overall game.

Little is known of The Wizard before the events of The Consuming Shadow. She believes that her magical research could provide a significant breakthrough to the scientific community. The Wizard favors logic and numbers compared to the literary minded The Scholar. Her relationships with her spouse or significant other and parent seem to be strained. Messages from them will routinely drain her sanity (though sometimes result in a small monetary gain instead).

All characters have introductions when selected in the character selection screen. This made up of two paragraphs, each picked from a pool of pre-written passages. These are the possible passages for the Wizard.

I learned a lot from my time as a captive of those lunatics. I learned their language, and I learned that the mad intelligence they worship must not be permitted to infect our dimension.

I have learned nothing about this darkness from conventional research. I had to turn instead to my 'other sources', which have definitively given the world a life expectancy of 60 hours.

The darkness that has descended upon this nation is infuriatingly unscientific. I refuse to lie down and wait for some all-powerful arcane being to rewrite the laws of physics.

My encounter with the strange man who rescued me from the cult left me curious about his mission. After extensive research, I have decided that it shall be my mission, now, also.

For too long have I tolerated the inferior minds that surrounded me, assured of their concrete view of the universe, and deaf to all my experimentation with powers on a larger scale. All of them are silent now, but before I can be proved right, I must first save the world.

Sometimes the runes and their syllables are clear, and sit heavily in my memory like harsh stone slabs. At other times, I find myself unable to even hold the simplest of them in my mind. I fear I must combat these invading forces now, for my mind may soon cease to be my own.

This world stands on the brink of a great and traumatic transformation. Afterwards, human beings may or may not have a place on whatever world remains. It must therefore be prevented; there is no other rational view. If I must sacrifice myself to this end, then I will.

I find myself giddy at the thought of putting into practice my considerable research into the harnessing of extradimensional energies. And yet, I am troubled by the effect it has already had on my mind. The more I concentrate on the runes, the faster they seem to slip away.

For the first time since I curtailed the invasion of the Ancient, the runes have been active again. They are indicating towards Stonehenge, where the underground complex has opened up again.

My attempts to research magical applications have been utterly frustrated until now. This presents a prime opportunity for self-education, and to put my understanding of magic into practice once again.

Is this all a waste of time?

Am I really learning anything?

Will I find answers to my questions?

Does magic originate from the Ancients?

Do these creatures require magic to live? 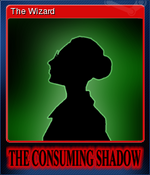 A practitioner of magic with a mild case of something on the autism spectrum. She is one of the very few who can interpret the runes without them corroding her mind, if she can maintain focus for long enough.

Retrieved from "https://the-consuming-shadow.fandom.com/wiki/The_Wizard?oldid=5087"
Community content is available under CC-BY-SA unless otherwise noted.