Also known as the Ministry Man, Trilby is an agent of the Ministry of Occultism, and is one of the playable characters in The Consuming Shadow. He is also a character featured in the Chzo Mythos, acting as the protagonist of the first and third entry: 5 Days a Stranger and Trilby's Notes, respectively. The Chzo Mythos is a videogame series made by Ben "Yahtzee" Croshaw, who also developed The Consuming Shadow.

Trilby has £100 and the full banishment incantation at the start of the game, as well as knowledge of all the towns in England and Wales. However, he only has 24 hours to banish the Ancient, and doesn't know its identity.

Trilby also has a unique constellation when using Birth Stars, in the form of The Emperor, each Birth Star placed at the exact center gives a +20% discount on ammo, items and hospital services (to a maximum of +70%).

Trilby is unlocked by completing the game with ending A, B or C.

As Trilby, it is entirely possible to immediately go to Stonehenge, ignoring all the dungeons and gathering clues there instead. Since Stonehenge is very large, and there is a fairly even ratio of clues to equipment that can be found in the lootable containers, plus all of the aforementioned subtle clues, identifying the invading god isn't necessarily difficult. Should the player get unlucky, they may not get the best clues and find it difficult to do this. Doing this also doesn't give out much experience points at the end, as the player wouldn't have found many clues, killed many minions or explored any dungeons.

Trilby was a student in mechanical engineering in his early life. Sometime in 1988, he became a cat-burglar and grew to be quite well known. With his engineering skills, he created his signature tool: a grolly, which was a blue brolly (British slang for 'umbrella') with a grappling hook inside it. In Trilby: Art of Theft, it also showed the ability to act as a stun gun.

Trilby prided himself as a "gentleman thief", never stealing what he thought the owner might really need. As well as his trilby, he frequently wore a two-piece suit, adding to his gentleman-like character. Yahtzee, during his review of 5 Days a Stranger, describes his voice as "affected upper-class but a little bit posh and enigmatic", which also adds to his image.

On July 24th, 1994, he became trapped in the DeFoe Manor by the ghost of John DeFoe. After Trilby escaped the manor, his five days inside traumatised him and caused him to become sloppy in his thievery. He was caught, but was offered a place on the Special Talent Project as a paranormal investigator for the Ministry of Occultism. His adventures there are the main plot of Trilby's Notes. He plays a minor role in the subsequent game 6 Days a Sacrifice.

Trilby's activities over the last few days leading up to the events of The Consuming Shadow can be found in the diary he wrote, which the player can collect pages of while exploring dungeons in-game.

All characters have introductions when selected in the character selection screen. This made up of two paragraphs, each picked from a pool of pre-written passages. These are the possible passages for Trilby.

If you want something done properly, you have to do it yourself. I am no longer content to sit killing time, waiting to see if the human race still has a future on this planet.

The twilight of humanity grows closer and closer and the shadow grows stronger and stronger. And I've decided this matter can no longer be left in the hands of enthusiastic amateurs.

Something happened to the scholar. I'm hearing reports of his body showing up with a self-inflicted gunshot wound. I wish all of us could have the luxury of an easy way out of this.

Well, this will teach me not to sub-contract. The scholar has gone dark. He either died, or lost his mind, or suffered some other terrible consequence of not listening to me.

Fortunately, I have what the scholar lacked: the support of government resources. I have the banishment ritual, and I have money. What I don't have is the identity of the invading god, nor do I have much time. I estimate that 24 hours remain before the incursion event.

I recovered the scholar's notes from his abandoned car. Most of them were covered in deranged scribble, but the important thing is, he found the banishment ritual. Unfortunately, now I only have 24 hours to deduce what I'm supposed to banish when I reach Stonehenge.

With the time I wasted concluding matters at the Ministry - not to mention the bullets - the human race is perilously close to the cosmic deadline, So I grabbed what information I could find on the banishment ritual and stole my secretary's car. Can't trust anyone.

I wasn't actually expecting to get out of the Ministry building alive. Perhaps the shadow is confident that its schemes can no longer be reversed. It may be right: there are only 24 hours left. All I have to turn the tide is a banishment ritual with no name attached.

I may be persona non grata at the Ministry now, but I still have the contacts. And they brought a very strange story. Apparently, a very familiar-sounding doorway has appeared at Stonehenge.

At this point I don't know if the Ancient is invading again, or if this is just yet another lingering after-effect of their last attempt. One thing's for sure: I'll get no answers standing at the entrance stroking my chin.

Could the Ministry have handled this without me?

Was I right to abandon the Ministry?

Am I doing the right thing?

Am I going to survive this?

Will I ever reach the bottom?

Should I have acted faster? 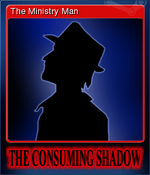 A veteran paranormal detective and senior agent of the Ministry of Occultism, fighting to maintain control as the corruption of the Ancients encircles him. Has he bitten off more than he can chew this time?

Retrieved from "https://the-consuming-shadow.fandom.com/wiki/Trilby?oldid=5083"
Community content is available under CC-BY-SA unless otherwise noted.